Home
News
Actress and singer Nikki R. Miller founded NRM Faith Based Films to fill the growing void for quality, family oriented films that emphasize stories of faith and hope. Her recent novel, Change of Heart (NRM Faith Based Films), is a novelization of the upcoming film. The tale examines the damage done to families by long-harbored anger and resentment–and the redemption available to those who seek it.

About the story: Calvin Hardy Jr. seems to have it all–a loving wife, active children and a successful career as a project development engineer. Yet he is so consumed with anger toward his father that it threatens to destroy any chance of happiness he has at home. Driven by deep-seated resentment from having found his father cheating on his mother in his youth, Calvin eventually makes a poor business decision that takes him away from his wife and children just when they need him most. It is only when an unthinkable, life-altering event occurs that Calvin sees the devastating effect of his long-held anger on not only himself, but on the family he worked so hard to build. 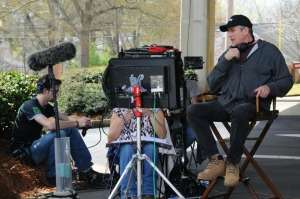 Change of Heart pierces the heart of anger and bitterness and reveals how faith and forgiveness have the power to change lives. Inspirational and extraordinarily relevant to our times, the novel is a must-read debut and a stellar introduction to the body of work yet to come from Miller and NRM Faith Based Films.

Change of Heart is Nikki R. Miller’s debut novel and the novelization of the screenplay she wrote of the same name, currently in pre-production with partner Buffalo 8 Productions out of Beverly Hills, CA. Born and raised in the St. Petersburg-Tampa area of Florida, Miller now lives in Atlanta, GA where she also mentors and speaks to young people, encouraging them to follow their dreams without compromise.