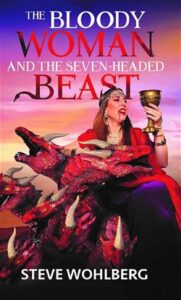 Priest River, ID (January 21, 2021)
In his newest book, The Bloody Woman and the Seven-Headed Beast, Bible prophecy expert and Christian fiction author Steve Wohlberg warns that increased ties between the United States and the Vatican is specifically mentioned in the Book of Revelation.

“There are three seven-headed beasts in Revelation, and each represents distinct phases of Rome, sitting on The City of Seven Hills,” says Wohlberg. “The first beast in Revelation 12:3 represents Satan primarily, but also Rome in its imperial phase, through which Satan worked to crucify Jesus and to viscously persecute His followers. The second beast in Revelation 13:2 represents Rome in its papal (Pope-led) phase during the Dark Ages. The third beast represents Papal Rome in its present and soon-coming fully revived phase during earth’s final crisis. Pope Francis is now combining the vast wealth and influence of the Roman Catholic Church with Fortune 500 companies to help “fix” current problems on planet earth. ”

Wohlberg asserts that America is specifically referred to as the mighty nation with “two horns like a lamb” in Revelation 13:11. He also contends that scripture makes it clear what will happen to the United States.

“Revelation 13:11-15 indicates that America will finally ‘speak like a dragon,’ set up ‘an image’ (or likeness) of papal Rome and will follow in her steps,” says Wohlberg. “During earth’s final crisis—which we are rapidly nearing—America will tragically deny her essential constitutional principles of freedom of religion, freedom of speech, and freedom of the press, and will descend into dark tyranny.”

‘The Bloody Woman and the Seven-Headed Beast’ goes much deeper into the prophecies of Daniel and Revelation, especially Revelation chapter 17. I liken this new book to Prophecy 10.0. Ultimately, my new book explores the roles of America and the Vatican in earth’s final days, God’s just judgments upon apostasy, and the deliverance of His people who remain loyal to ‘the Lamb.’ I let the Bible explain itself, point by point, in light of well-established facts of Christian history. God’s Word, centered in Jesus Christ, is home base in every detail.”

About Steve Wohlberg:
Bible expert, international speaker, television producer, and author of over 30 books, Steve Wohlberg has been a guest on over 500 radio and TV shows and has also spoken inside the Pentagon and U.S. Senate. Widely regarded as an apocalyptic expert, he has been featured in three History Channel documentaries and one National Geographic International documentary offering insights into the book of Revelation. He earned a B.A. degree in Theology from La Sierra College and his Master of Divinity degree from Andrews Seminary. He currently lives in Priest River, Idaho, with his wife Kristin, their son Seth Michael, and their daughter, Abigail Rose. For more information visit www.whitehorsemedia.com.