The bestselling author of more than one hundred books, Robin Jones Gunn is best known for the widely popular Christy Miller series for teens. Her award-winning Christian fiction for women includes the Glenbrooke and Sisterchicks(R) series, and her Father Christmas novels have been made into three Hallmark movies. Her latest novel, Being Known (Multnomah), asks: What does it mean to be truly known? In a marriage, in a friendship, or by a loving God? In our interview, Robin shares where the initial set of questions that spurred the story came from, reveals what “Haven Makers” means to her, and we explore some character bits more in-depth.

Being Known asks a number of thoughtful questions. Where did they come from?

I receive a lot of mail from readers and many of them generously share their personal stories with me. I saw a recurring theme over the last few years as they’ve talked about the longing to feel close to God and to others and know that someone genuinely loves them.

Have the shifts in our culture over the last decade contributed to this need for deeper relationships? So much of our connections are now virtual instead of face to face. We have become skilled at portraying a polished, surface level version of ourselves with our virtual friends. We self-protect by not talking about our true struggles as our circles expand because we don’t know who we can trust with our intimate hurts.

The voices of these Beautiful Readers motivated me to write a novel about women, married and single, who form a close face-to-face friendship and go heart-level deep in their communication.

A “haven” is such an inviting, affirming concept.

I have extraordinary women in my life who are havens to me. They provide safe harbor during difficult seasons and speak truth to me in a way that I can receive it and make needed changes in my life. Those friends are Haven Makers for me and their input and unwavering love has changed my life many times over.

When I put together the five women characters in the first book, Becoming Us, I wanted to show what it looked like to have friends you can count on and grow with over the years. I didn’t originally plan for both Christy Miller and Sierra Jensen to be two of those characters. But as I started writing I keep “seeing” them in the room and I soon knew they needed to be part of the Daughters of Eve, as the women started calling themselves.

It’s painful when I hear from readers who don’t have any sort of nurturing community with women in their real life. My goal in writing this series was to motivate those readers to both seek heart-to-heart, face-to-face friendships and to do so by becoming a Haven Maker themselves. I think we become Haven Makers when we invite others to come as they are and receive the comfort and small joys of being known.

Are any of the ladies in Haven Makers based on people you know?

Aside from Christy and Sierra being two imaginary friends that I’ve known for many years, I found inspiration from my daughter and her friends. I was in awe of the creativity and caring that her circle of friends expressed to each other.

One of the young women, Alyssa Bethke, invited my daughter and me to a Favorite Things Party at her home. What’s interesting is that I’ve known Alyssa for a decade. She and I co-authored a non-fiction book titled, Spoken For: Embracing Who You Are and Whose You Are. You’d think I’d feel right at home going to her house for a party.

Well, being the “high functioning introvert” that I am, when I arrived that night and heard the young women talking and laughing, I almost didn’t knock on the door. I felt like a 6th grader on the first day of school. All I could think was, What if I don’t fit in? What if nobody talks to me? I shouldn’t have come.

I did finally knock on her door. It was a wonderful evening in every way. When I got home, I journaled about how I felt and how that lovely circle of young women made me feel so wanted and included. That became the inspiration for the opening scene of Becoming Us when Emily almost turns around and goes home. The story shows how much she would have missed if she’d let fear make the decision for her.

While writing their stories, did any of the characters surprise you?

The only surprise was how many times I changed the name for one of the characters. I’ve written over 100 books and most of them are in series. Many of my characters show up in multiple series. It’s turned into an Easter egg hunt for some loyal readers.

That’s why it was challenging to find a name I hadn’t already used and make sure it truly fit the personality of the character. I was halfway through the first book before I was confident that her name was Tess. As I was writing about Tess in Being Known, I remember pausing and wondering how I could have possibly considered any other name for her. She’s a very familiar imaginary friend to me now.

What spiritual themes are you exploring?

Relationships change in different seasons. For Jennalyn, her closeness to God seems to narrow as she gives into the delayed grief she didn’t fully process a few years earlier when she lost her mother. The silence draws her inward and continues to diminish her most important relationships.

Those who have waited on the Lord during painful seasons will recognize what Jennalyn is going through. They might also understand how vulnerable she is when an old boyfriend shows up and seems to be the only one who knows her and understands.

How can a woman navigate the emotional tug in such a season? Who will speak truth to her when she finds it easy to turn to what-if scenarios?

The power of being in close fellowship with women who know you well is a spiritual theme that is rarely focused on in novels. That’s why I wanted to explore what can happen when we are vulnerably honest with our true friends and they point us back God.

What are you hoping readers will take with them after reading Being Known?

A closer relationship with God–to realize they are fully known by God and to desire to know Him fully.

I’d also love to see more women find ways to connect on deeper levels with other women because we need each other. We need friendships that are havens during the difficult times in life. 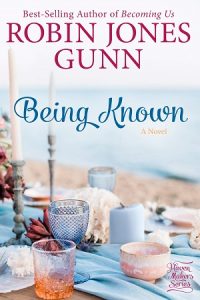 Being Known
(Haven Makers #2)
Multnomah
Buy the book from our store!