The latest novel from Katie Ganshert, No One Ever Asked (WaterBrook), is a riveting tale about the way we see one another, the lies we tell ourselves, the questions and stories that go unexplored, and the tragedies that result from our blindness. In this interview, the author shares the real-life events that inspired the novel, her own experiences that parallel those of the characters, and what she learned about herself writing the book…

Tell us about your new novel, No One Ever Asked… 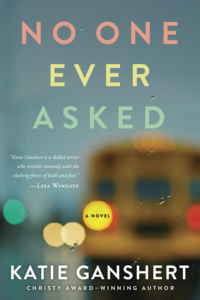 No One Ever Asked is a story about three very different women whose lives are brought together when an impoverished school district loses its accreditation and the affluent community of Crystal Ridge has no choice but to open their school doors.

Camille Gray is the wife of a corporate executive, mother of three, and a long-standing PTO chairwoman. Jen Covington is a newly adoptive mom who’s struggling with a happily-ever-after so much more difficult than she anticipated. And Anaya Jones is the first woman in her family to graduate college and a brand-new teacher at Crystal Ridge’s top elementary school, unprepared for the powder-keg situation she’s stepped into.

It’s a story that explores the implicit bias impacting American society, and asks the ultimate question: What does it mean to be human?

A couple years ago, I was listening to an episode on the popular podcast This American Life. The episode was titled, “The Problem We All Live With,” featuring investigative reporter Nikole Hannah-Jones, who covers race in the United States. She was sharing about a modern-day integration story, wherein a Missouri school district comprised almost entirely of low-income, black and brown students lost their accreditation, triggering a law that allowed these students to transfer to a mostly white, affluent school district nearby.

The podcast included several sound bites from a town meeting held in one of the affluent district’s high schools, and the pushback from the parents was shocking. I couldn’t believe it was from 2013. It was a story that captivated me about a topic that impassions me. When it came time to write my next novel, this was where my heart kept returning.

The book is told from the perspectives of three main characters with different experiences and backgrounds. What did your research process look like to accurately capture each of their voices and stories?

Writing a book truly takes a village, especially a book like this one! I’ve never been on the PTA, and I’ve never organized a color run—a district-wide fundraising event that takes place in the story—but I have friends who have, and they let me interview them.

While I am an adoptive mother, like Jen, I’m not very familiar with the struggles that often come with adopting an older child. I’m part of a Facebook group much like the one Jen is a part of in the novel, so I reached out to the moms in that group quite often with specific questions.

As far as things in Anaya’s life that are unique to the black experience, I listened to a lot of people. And I read a plethora of books, memoirs, and articles, all of which helped bring authenticity to Anaya’s character.

One of the main characters, Jen Covington, is the adoptive mother of a daughter from Liberia. How is your own adoption story and experience as a transracial family similar to Jen’s? 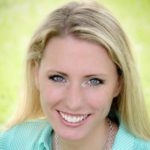 There are a lot of similarities, and a lot of differences as well. We adopted our daughter when she was a couple months shy of three, which isn’t the same as adopting a seven-year old. Our daughter also has some very unique special needs, which make our stories quite different. A lot of the struggles Jen has with Jubilee, her daughter, aren’t the same struggles I’ve had with my daughter.

What absolutely is similar, is the fact that we both struggled. I think this is true for many parents who adopt internationally—especially when that adoption takes a painfully long time.

For so long, you are fervently praying for and dreaming about this child you don’t actually know. And then one day, this child you loved so desperately from afar is up close and personal, under your roof, and you are essentially strangers.

Not only that, they are grieving the loss of so much, with very real trauma in their past, and that trauma doesn’t manifest itself in pleasant, lovely ways. There’s often this sense of guilt, too, because God just answered one of your most desperate prayers, so you should be filled with gratitude, right? And your story is so inspiring to the people on the outside looking in.

But for most families, attachment takes time. It’s something you have to fight for. The days, weeks, months afterward can be very isolating. This is the piece of Jen’s story that is similar to my own.

As well as the struggles that come with being a white mother to a black daughter, such as the learning curve that comes with hair care, or the desperation one feels to give their child mirrors—people in their life who look like them. Representation is so important. As a trans-racial family, you become quickly aware of how segregated we still are as a society.

What did you learn about yourself or others while writing this book?

This story really brought home to me the fact that no one person, myself included, is all one thing or the other. All of us are complex people with complex histories and experiences, which indelibly shape the way we look at ourselves, others, and the world around us.

I also learned that racism runs deep in the fabric of our society, and if we’re ever going to honestly address that, we have to be willing to listen to perspectives and experiences that are unfamiliar and different from our own.

No One Ever Asked
Katie Ganshert
WaterBrook