Before he became a Christy Award-winning novelist, Australian author David Rawlings spent 25 years writing everything but fiction—ranging from sports journalism to copywriting to corporate communication. His latest novel is Where the Road Bends (Thomas Nelson). In our exclusive interview, David shares why he set this story on his home continent, explains the challenge of presenting visual beauty in words, and makes a compelling case as to why we should all fall in love with Australia’s Outback.

David, Where the Road Bends is a story about a reunion between four friends—fifteen years after their college graduation. What inspired this story?

One thing definitely inspired the location of the story: I wanted to write a novel that was based in my country. My first two novels—The Baggage Handler (that’s the one that won the Christy Award in 2019) and The Camera Never Lies—were set in an Any City, and I’ve had feedback from readers around the world thanking me for writing a story that felt like it happened in their home town.

But this next one isn’t set there. Where the Road Bends is firmly placed in my home, Outback Australia. I’m an Aussie writer and I wanted to transport readers to my home—places I’ve visited; places I’m proud of.

While the protagonists are American characters getting together fifteen years after graduation, the landscape is a character in itself. It’s rough and rugged but it’s beautiful and delicate. There is a big expanse of nothing, but it’s so full of life.

Did you go into this story wanting to explore a theme, or with a particular goal?

All my stories have a central theme at their heart. I’ve written about dealing with your baggage and being honest in relationships. This one is about the direction we take in life.

I also started—like I always do—with a question. This time it was “how did you get to where you are on the road of life and where are you going from here?”

Each of the characters left college with a picture of how their lives would turn out. Fast-forward fifteen years and they are restless with where they are—some because success has left them empty; others because of unfulfilled dreams.

That’s the theme I wanted to explore. If you were given a chance to re-evaluate your life and change direction … would you? What’s interesting is that Where the Road Bends is about being forced to take a pause in life to reflect on where you’re at, and this is exactly what’s happened with lockdowns and sheltering-in-place.

You also set the characters to explore the Australian Outback. Did you find any aspect of this especially challenging?

My biggest challenge was to do justice to the landscape of Australia. I wrote passages to help paint a picture of what it’s like, but most of the time I felt like I was battling the feeling of being an art student gripping a brush for the first time while taking on a Picasso painting.

So, I spent time over those passages, like this:

A cramp seized Andy’s shoulders as he pulled them in tight, hemmed in by a domestic flight cursed with the lack of the luxurious space of international business class. He had withdrawn into the view.

For two hours the ground had changed thirty thousand feet below as the crisscross suburban gray of the city gave way to deep green, which gave way to dusty brown, which gave way to an ochre orange. Now the earth was rich red. It was as if the lifeblood of the country was being cleansed as it flowed back to its heart.

This is what it’s like to fly into central Australia. We all pretty much live on the coast, so when you fly out of our capital cities and toward the outback, for thirty minutes there are signs of life and then there’s…nothing. But the thing you notice most is the change of color, and you know you’re over the outback when everything below you is red.

Or this particular passage:

The clouds slowly unveiled flecks of silver paint from an artist’s wide brush swept across the heavens. A chill moved in as the darkness chased the daylight from the landscape that surrendered by hues—orange to pink, pink to gray, and gray sliding to black. The dried gum tree crackled as the dancing campfire flames consumed it. Shadows shimmered between the swags and the spinifex, and Lincoln was washed in a warm orange glow.

A silence draped over the crater as Eddie released another shower of sparks into the night air. “You will discover yourself being out here for a while.” He swept an arm upward. “Sleeping under the stars. Disconnected from being bothered every five minutes by messages that don’t really matter from people you aren’t really with. Away from the barrage of overselling of stuff you don’t need. Taking a moment to appreciate our world and your place in it.”

When you’re in the outback, you’re in the middle of nowhere. You are, at times, hundreds of miles from the next person. And at night, the stars unroll until the heavens are filled. I’ve never seen anything like it. You feel so insignificant, yet so in wonder of the power of creation.

Did any of the characters surprise you while writing their stories?

Of the four protagonists, probably Bree. She’s a creative, introverted soul who was too scared to take on her dream of a musical career. But when she’s forced to overcome crippling fear to survive, she’s able to do it. She was always able to. I found myself cheering when writing those scenes and seeing what she could do.

And one of the characters is given the option to turn their lives around but doesn’t. That didn’t surprise me as much as sadden me. No spoilers as to which of the four characters it was …

What would you like to be the readers’ takeaway after reading Where the Road Bends?

I write all of my novels so that once the back cover is closed and the final page is turned, that is the start of something: a conversation, a thought process, a prayer. It’s my hope that a reader will finish Where the Road Bends and think about where they are on the road of life, and where they’re going from here.

I would also love them to fall in love with outback Australia like we all have down here. It truly is a wonder of creation. 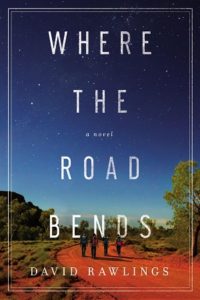 Buy Where the Road Ends in our store HERE!