Over several books, readers have followed Christy Miller and Todd Spencer through their teens to college through marriage. Now, author Robin Jones Gunn is showing their adventures in parenting in the series “Christy & Todd: The Baby Years.” In this interview, Robin explains why she’s continued sharing the adventures of Christy and Todd as they begin a family, the challenges of writing this new chapter in their life together, and what the future holds for Christy… 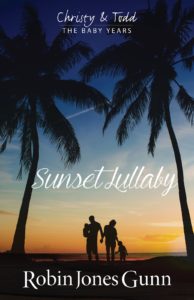 Over the years, readers have followed Christy as she grew up, went to college, got married, and is now a young parent. What inspired you to continue writing about Christy and Todd?

The inspiration came from three sources. The most vocal inspiration came from the millions of Beautiful Readers who grew up with Christy and Todd. They were relentless in their requests to see the character continue because they too, were navigating marriage and parenthood and wanted to see how Christy was doing in this next season.

Many of them sent me photos of their babies and handwritten letters sharing how they’d surrendered their lives to Christ while reading a Christy Miller book in high school. When the first Christy & Todd: The Married Years book came out the comments poured in on social media from elated readers who felt as if an old friend had stepped back into their lives and they didn’t want to say good-bye again so could I please keep writing!

The most encouraging source of inspiration was my husband. The two of us were on a camping trip a few years ago and I was telling him all my ideas for future writing projects. He said, “If you knew you could only write one more book in your lifetime what would you write?” Without hesitation I said, “Christy and Todd in their married years.” Then I told him all the reasons why there wasn’t really a market for such novels and how some of my other ideas might be better.

He said, “Only do what only you can do. Your ideas for other books are fine. But only you can write about Christy and Todd.” So I started writing and one story turned into six books in The Married Years and The Baby Years series.

The third source of inspiration was from the Lord. This is the most important because I always spend time praying and journaling before I start a new project. I write out a prayer of dedication to the Lord for each book and ask for His wisdom and guidance as I write.  I’ve written over 90 books and it’s amazing to look back and see God’s hand all along the way.

What are the challenges of writing about Christy & Todd as young adults who are now parents?

You’d be surprised at how naturally the storylines fell into place in each book. Our two children are now grown and married and have children of their own. I watched them navigate this next season and listened to their real life stories. We have great kids and they married wonderful spouses.

Even so, I could see that couples struggle with the same issues in each generation. For the Christy and Todd books I focused on communication, finances and expectations. In each story they work through these challenges and always come out closer to each other and closer to the Lord. Isn’t that the challenge of every married couple? Especially during the early years?

Do you find that “The Baby Years” is connecting more with longtime readers or newcomers to the characters?

I thought the books would appeal mostly to the longtime Beautiful Readers who subscribe to my newsletter and keep up with me on social media. But I’ve heard from many brand new readers who told me they could relate to the characters so well in the Married Years or Baby Years books that they went back and also read the Christy Miller High School series and Christy & Todd: The College Years.

Altogether, that’s 21 books about Christy. If you add the spin off series about her Forever Friends, Sierra Jensen and Katie Weldon, that’s another 19 books. For women who love binge reading, these 40 stories are ready and waiting and brand new readers are devouring them. I have an excellent editor who has worked with me on every book over the years. She and I have tried to make each book a standalone so that new readers will not be lost. That extra effort worked. New readers feel welcomed into the world of Christy regardless of which book they pick up first.

The many longtime readers who have enthusiastically supported the continuation of the story of Christy and Todd tell me that every new book feels like a reunion with good friends. I love hearing from Christy Miller readers who now have teen daughters and they are reading the series together and discussing the issues in each book. The themes of the stories are still relevant in this generation.

I recently met a second generation Christy reader who was 13. She told me she was exactly like Christy and if I ever have the books made into movies, she wants to play the role of Christy. Her mom grinned and said, “I felt the same way when I read them as a teen.” Then she thanked me for continuing to write stories in this series of “modern classics.”

I never guessed when I wrote the first book for the girls in our church youth group that there would ever be more than one book or that they’d be called “modern classics”. As Christy’s best friend Katie would say, “It’s a God-thing.”

What do you hope readers will get out of the series?

I can tell you what they have been getting out of the series because they tell me all the time. They have found Christy and Todd to be role models as well as fictional friends. They tell me that as they read they discover they aren’t the only one going through whatever issue is in the storyline. The camaraderie brings them comfort, hope and sometimes direction on what they should do next in their own life.

I always pray that readers will feel their heart growing closer to God by the end of each book. I have seen that prayer answered many times over. As a matter of fact, the verse I wrote in my journal along with the prayer of dedication for the very first novel was Psalm 102:18. “Let this be written for a future generation, that a people not yet created may praise the LORD.”

Do you have current plans to continue following Christy and Todd as their kids grow up?

Christy is one of the main characters in the new Gather series I’m currently writing for WaterBrook/Multnomah. I’ve taken a little turn in storytelling. The new novel, Becoming Us will focus on a small group of Christy’s friends and how they gather regularly as young moms to encourage and support each other during the child-raising years. Close friendships has been a continuing theme throughout the Christy Miller stories and I knew it was time to explore how those relationships ebb and flow.

What are the best things that readers can do to support their favorite authors?

Aside from buying their favorite authors’ new books, it’s amazing what readers can do when they share on their social media.  I have a series of Christmas novellas that have been made into Hallmark movies. When the first movie aired in November 2016, I was overwhelmed by the support of all my readers who spread the word.

Finding Father Christmas broke the network record by being the most watched and highest rated Christmas movie of 2016! I soon received an email from the President of the Hallmark Channel saying that my readers certainly “showed their support.” I agree.  They did! As a result a sequel movie went into production and Engaging Father Christmas will air on November 12, 2017.

I’ve seen how the power of reader support is being heard in Hollywood. When readers buy books with clear Christian values and tune in to the programs created from those books, it nudges the market to continue to provide more books and movies with the same wholesome content.

I’m so grateful to all you Beautiful Readers that have asked me to keep writing more stories for you over the years. I take your requests seriously and I hold you in my heart.