Chris Fabry is an award-winning author and radio personality who hosts the daily program Chris Fabry Live on Moody Radio. He is also heard on Love Worth Finding, Building Relationships with Dr. Gary Chapman, and other radio programs. In 2020, he was inducted into the Marshall University School of Journalism and Mass Communications Hall of Fame.

In this interview, Chris talks with us about his latest book release, his novelization of the Kendrick Brothers movie, Lifemark.

FF: Without giving too much away, can you tell us a little bit about the storyline of Lifemark?
A crisis pregnancy leads to a difficult decision by the birth mother. Years later the son she placed for adoption wants to know his birth mother—but there are complications. The story goes into all those complications and shows the results.

FF: What intrigued you most about this story when you first heard about it?
I was arrested by the courage of the birth mother to choose life in the midst of a hard situation.

FF: What do you hope happens with this story?
I hope the film and book cause someone to choose life. I think this is the only book I’ve ever written where I feel like words on a page might save a life.

FF: What is the writing process of taking a Kendrick Brothers movie and creating a novel?
I use a farm analogy to answer that. The Kendricks put in all the fence line and I get to play in the pasture. I know the plot points and all of the hard decisions have been made. All I have to do is ask good questions to go deeper into the people who populate the story.

FF: Is it easier or more difficult to write a novel based on a movie?
Nothing is easy about writing. But having the main storyline and characters fleshed out is a luxury to me. My other novels are built totally from my own imagination. I think that’s harder, but there are struggles with both.

FF: What creative liberties did you take with the novelization as compared to the movie storyline?
I wouldn’t call them liberties because the Kendricks have full veto power over anything I come up with. You’re not going to find space aliens parachuting into the story or things like that. What I try to do is go further into the motivation of the characters and mine what’s going on inside. You can’t do that with a film the way you can with a novel.

FF: Talk about some of the major themes of the story and how they impacted you personally.
Forgiveness and receiving forgiveness is a big part of the story that will connect with readers. I find that many people believe God will forgive others but can’t forgive them. I loved the theme of trust in the face of doubt. The adoptive parents have been through the wringer with a lot of loss, so giving hope one more chance made a huge difference in the story. Then there’s the theme of letting go of outcomes. So much of life is about achieving a desired outcome, but there are some things where you do all you can, you pray hard, and then you simply leave them in God’s hands.

FF: Why does our world today need to hear the message of Lifemark?
The devaluing of life in our culture has had tragic consequences. I’m hoping this story will open hearts to the miracle of life and foster a wider conversation about the value of every life.

FF: How do the characters in the novel go against current culture?
The birth mother weighs her options and chooses the harder route instead of the easier one. The adoptive parents choose to move toward adoption, even in the midst of some pain in their past. Most people in our culture choose what’s easiest.

FF: Which character was your favorite to develop?
David’s best friend is Nate. He has such a quirky personality in the film and I tried to bring that onto the page. In the novel, you get to see Nate and David in elementary school. You also see Nate’s sister, who has a difficult backstory. I think viewers of the film will enjoy the extra scenes with Nate.

FF: What role does faith play in this novel?
Faith in God and his ability flies like a drone over the whole story. The scene where the birth mother is holding her newborn son, knowing she will have to release him soon, is gut-wrenching, but the prayer she prays is so genuine. All of the characters grapple with the big questions of life.

FF: The film is based on a true story. Did that help as you fleshed out the novel?
It did. We were privileged to have real people who lived this story as a pattern to work from. At the same time, it’s not a documentary, so we added elements that provided dramatic moments but didn’t do violence to the arc of the true story. Having them give input was invaluable to make this a realistic portrayal.

Book Summary:
Lifemark is the novelization of the Kendrick Brothers’ movie by the same name, a young man adopted at birth goes on a journey to find the birth parents he’s never known. Lifemark is a true story of adoption, redemption, and hope.

For eighteen years, she tried to believe she had made the right decision—for him.  But if she never saw him again, how could she ever be sure?  Melissa had clung to the thin thread of hope given by the adoption agency that someday her newborn son might want to connect with her. When his eighteenth birthday arrived, she called the agency to simply update her contact information, not expecting a response.  Susan and Jimmy Colton had raised their boy with openness about his adoption. After the heartbreaking loss of two infant sons that marked their early years of marriage, they promised themselves they would try not to hold too tightly to David or hold back any information he wanted about his birth. And so they waited on him.  David was hesitant to talk about the questions and curiosities about his birth story that often haunted him. But as he neared adulthood, his need to know the full story of his life became something he couldn’t shake. Until the call came to the Coltons from the adoption agency, and the first tentative bits of communication and connection set in motion a story that would change all their lives forever.  From the team that brought you the movies Courageous and War Room comes Lifemark, the novelization of the new film inspired by a true story of adoption, redemption, and hope. 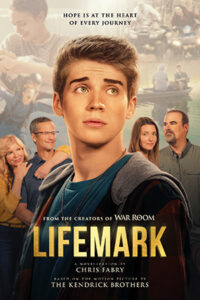