With his Christian rock band, Skillet, John Cooper has been rocking listeners since 1996. Now, he’s teamed up with Christian comics publisher Z2 Comics for Eden: A Skillet Graphic Novel. John co-created the idea and co-wrote the comic, which features the members of Skillet in a fantastical tale of redemption and finding light in the darkness. In this exclusive interview, John talks about his appearances on Marvel Comics’ YouTube channel, explains the collaborative process that went into the book, and reveals the spiritual heart behind the graphic novel…

John, tell us about Eden: A Skillet Graphic Novel. What inspired this story? 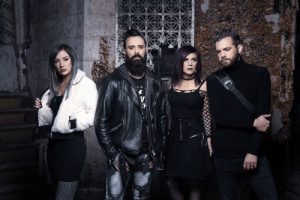 I love science fiction books and supernatural books as well as comics of course. It’s a look at a deconstructed future where the world is dying. There are factions of people fighting with one another in a struggle to survive. I wanted to pull on spiritual and philosophical themes of our universal desire to get back to where we came from.

Humans have a sense that we were meant for something more, but we cannot quite remember what it is. I wanted to combine that with action and a touch of the supernatural. In the book, there is a common dream that the “chosen” have that shows a door to a better world.

I also personally aimed to make a graphic novel that was family friendly and reclaimed comics as something that kids could read. Star Wars and Star Trek always pulled off exciting stories for all ages.

What about this story made it need to be a comic?

Every story should be a comic! Haha, maybe not, but comics are fun and it’s a different form of art to tell a story with pictures. This was interesting to me that even though I have loved comics my entire life, I never really understood the importance of art in the story telling.

Part of the emotion of the story in my opinion is the beautiful art and colors. It has a surreal look to it, which makes sense because we are meant to be dealing with the supernatural.

How did you come to work with Z2 Comics and Random Shock Studios for this?

I received a call from Z2. I believe it was because of my known love for comics and the fact that our fan base is extremely loyal and open minded. Some music fans do not prefer bands to branch out and do other things, but Skillet fans are eternally loyal and positive.

I was thrilled to try this and loved the process. Actually, to be honest I was nerdily giddy over it.

It was thrilling! I loved talking with the writers and they were extremely well read and intelligent. Perhaps that sounds obvious but I’d never talked to a writer before so I was very impressed with the breadth of literature and philosophy they could pull from.

And thankfully they never made me feel stupid! If there is anything I am good at, it’s a combination of (1) knowing my own identity and being comfortable with who I am. And (2) being able to communicate that identity. I think that because I could articulate what I was going for and the parameters, the writers took my thoughts and ideas and hit a homerun.

That is why Eden has such a similar feeling as Skillet music. And dealing with Chris Hunt on the art was super fun! Talking through the clothing and the weapons etc. I said, “Dude, you have to create an axe for me!” He really nailed it.

How did collaborative process on the comic compare with collaborating on your music?

In some ways the comic process was more fun. Probably because there wasn’t as much riding on it. If an album goes bad then your career ends, or else takes a hit, and if affects everyone working for you and your label and agents and management.

This was sort of like, we can do anything we want so let’s make sure it’s something we are extremely proud of. Making records is indeed fun because creating music is wonderful. But the amount of pressure and the amount of input is so vastly greater.

Dude, you were a guest on This Week In Marvel. You also got to share your extensive collection of memorabilia on Marvel’s Playback. How did you first become a fan of comics?

Yes I did and everyone should be jealous! It was such an honor and literally one of the best things of my career. My older brother loved comics and when I was growing up he took a deep dive into them. He religiously bought comics and I picked up on it from him.

I also loved to draw as a kid and though I wasn’t great, I was better than average. I think my love of the artwork is what drew me in more than the stories. But I also loved the justice of it all-good winning over evil etc. This probably explains why I never really liked the anti-hero books.

Skillet’s John Cooper on collecting Marvel comics around the world!

Is it all about Marvel for you? Or do you secretly also have non-Marvel collectibles?

I have tons of non-marvel! But probably the only DC I ever liked was Batman, who I love. Also, I was a fan of Star Wars comics growing up which is now run through Marvel but was not at the time. In terms of collectibles, I also have tons of Star Wars and various film paraphernalia mostly from science fiction films or TV.

Rock music and comic books are two completely different art forms—so, why do the two seem so complementary to each other? (Or is it just me?)

I actually agree with you they do have similar fans. I think that rock music is listened to by many of the marginalized crowd. The people that feel that never quite fit in, it never quite felt understood. There is a lot of emotion in rock music that doesn’t quite make it in to pop, in my opinion.

That is the reason that so many people have tattoos based on their favorite rock band or rock band lyrics, but very rarely do you see a Britney Spears tattoo. Rock music speaks to people in a different way.

And many times, those people live in their own heads, or tend to be people that don’t live on the surface. Many times, those same people are the ones that lose themselves in a book. Something about the art makes the story emotional.

Years ago, I interviewed you for the cover of 7ball magazine. (Man, that takes me back.) Here it is today, and you are still rocking it! What creative challenges are you still reaching for?

I’m thrilled to be still playing music. Staying sonically relevant is a real challenge because I want to try new things and break out of stereotypes-whilst making our fans happy by continuing to stay true to our sound. My goal is to keep being true but keep surprising new listeners with something that sounds fresh and relevant to them.

What do you hope readers come away with after reading Eden: A Skillet Graphic Novel?

Firstly, I hope they love it and that it’s exciting! I hope it causes them to think about the world we live in and our place in it, and how we can make it better.

On a deeper level, this book is my philosophy of life that I believe is a biblical one. Our world is dying, and we have been chosen and called by God—not just for eternal salvation, but to see the rule of the Kingdom of God here on Earth as it is in Heaven. Those biblical threads run through this book and I hope that people will have eyes to see the truth of it. 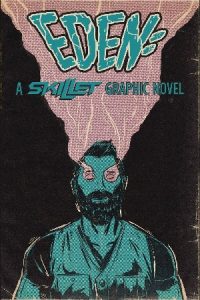