Tessa Afshar is an award-winning author of biblical and inspirational historical fiction. She holds a Master of Divinity from Yale University, where she served as cochair of the Evangelical Fellowship at the Divinity School. After working in women’s ministry for nearly twenty years, Tessa became a full-time writer and speaker.

In this interview, Tessa shares some of her thoughts on her latest novel, The Hidden Prince.

FF: Your recent novels have had New Testament settings. What inspired a return to the Old Testament?
Because of my own background, I have always wanted to return to ancient Persia as the setting for another story. The early period of Persian dynastic history is full of extraordinary, world-transforming events. I wanted to capture the smaller lives of two “ordinary” people against that larger, in many ways unfamiliar, backdrop.

FF: What are some challenges involved in researching and writing about this period in Israel’s history?
The Hidden Prince takes place more than a decade after the destruction of Jerusalem by the Babylonian king Nebuchadnezzar. A great number of Judeans have been taken captive by this time and are living in various parts of Babylonia. We know certain things about their lives in this period. But many of the daily details remain hidden from us. Complicating our understanding of the Judean captive’s life is the fact that they did not seem to live a one-size-fits-all existence. They appear to have occupied many roles, from slave to palace official.
Life in Ecbatana and Anshan seemed shrouded in even greater mysteries. As an author, I found the research into this complicated era daunting and yet undeniably exhilarating. I was writing the story of events and nations both well-known to us and also hidden by the mists of time.

FF: What inspiration and ideas led to Keren, your protagonist in The Hidden Prince?
I wanted to portray a woman who, in the course of the novel, loses everything and discovers that her destiny is forged in the midst of that loss. Keren grows up as a captive. But in that captivity, she is able to discover and use her gifting. That discovery is further enlarged by the seismic events that change her life. At the height of discouragement, Keren is presented with a mystery: teaching a shepherd boy how to become a king. I love this thread, because it draws the two halves of the novel together and pulls the events of the larger world onto the smaller stage of Keren’s life.

FF: Keren is sold into servitude to help her family survive. Can you explain what that meant in this period?
It could have meant any number of things. Some of the captives were sold into slavery and found themselves working the land outside the city of Babylon. Some would have served harsh masters who abused them. I portrayed Keren as having found a kind and wise master in Daniel, who, as a Judean, is led by the Torah in the treatment of the Judean servants and slaves who work in his household.

FF: What passages of Scripture were your foundation for The Hidden Prince?
In this novel, I try to imagine the beginnings of a time in Persian history when Jews and Persians became friends, and nations became better and stronger thanks to that friendship. Several decades after the events of this novel, the Persian court became populated by many well-respected foreigners, including talented Judean administrators such as Daniel and Nehemiah. I wanted to write a storyline that might explain and enlarge on this reality.

FF: Can you tell us a little about Jared, Keren’s friend and love interest?
Jared is born into minor nobility and, like Keren, has grown up as a Judean captive in Babylon. As such, he has to negotiate through life as a second-class citizen without growing bitter and resentful. He holds on to his faith during a time when other Judeans are being absorbed into Babylonian culture and religious practice.

When Jared is injured during a tragic accident, he discovers that chronic pain is not merely a physical issue. The Hidden Prince examines the emotional and spiritual fallout of how a good God could allow a terrible loss. In one scene, Jared has a conversation with himself that captures our struggle with God during seasons of unexpected and protracted suffering. Ultimately, Jared learns to resist the erroneous conclusions about God that his heart is struggling against.

FF: What did you learn from writing The Hidden Prince?
There are two ways to answer this. On one level, I gained so many extraordinary insights into Babylon, Media, and Persia during this era in history. I had an absolute blast learning about their customs, their architecture, their food, their schools, their kings, their poetry. On a different level, although this was a fun book to write because it had all the makings of a great adventure, it also brought the Scriptures alive for me. I was reading the books of Isaiah and Jeremiah as I wrote this story, and my research helped me to understand them so much better.

For example, when Isaiah tells captive Judeans, “You shall be like a watered garden” (Isaiah 58:11) at a time in their lives when they must have felt like a scorched desert, many of those same captives would have walked past Nebuchadnezzar’s Hanging Gardens. They must have seen the impossibility of a garden with large trees and tinkling streams on top of a roof. What should have been a scorched place, especially in hot Babylon, this rooftop, this brick-and-bitumen canopy, had turned into a verdant garden. What a promise to their hearts! Like that scorched rooftop, one day God wanted to transform their own lives.

FF: What is one faith theme in this story that is especially applicable to us today?
Most of us have, at some point, struggled to figure out our purpose on this earth. The Hidden Prince takes that question one step further. Could our mistakes and wounds rob us of the destiny God has for us? Could we be disqualified from living a fruitful life because we are too damaged? And, of course, the answer is no! In fact, when we surrender everything to God, he weaves our brokenness into the fabric of his plans.

This novel will minister to readers who need to remember that God is faithful in the midst of trials, that he is willing and able to redeem our mistakes, and that there is unexpected hope and grace around the corner.

FF: Can we expect a sequel to The Hidden Prince?
I am writing the sequel right now and hope to have it in readers’ hands in 2023.

FF: What is your hope for readers of this novel?
First, as with any good story, I hope they will find themselves escaping into a different realm populated by friends they love. If that world should come alive for the reader in a fresh way, allowing for a deeper understanding of the world of the Bible, then so much the better. I also hope that Keren and Jared’s inner journeys throughout this story will offer my readers new insight into possibilities for their own future, regardless of where they find themselves today.

Book Summary:
The beloved daughter of Jewish captives in Babylon, Keren is sold into Daniel’s household to help her family survive. She becomes Daniel’s most trusted scribe, while taking lessons and swordsmanship training alongside Daniel’s sons and their best friend, Jared.

But after a tragic accident changes the course of her life, Keren finds herself in a foreign country, charged with a mysterious task: teaching a shepherd boy how to become a lord. When she overhears whispers that hint at his true identity, she realizes she must protect him from the schemes of a bloodthirsty king.

Jared cannot forgive Keren. Still, he finds himself traveling over mountains to fetch her back to the safety of home. When he discovers the secret identity of Keren’s pupil, Jared knows he must help protect him. Love battles bitterness as they flee from the king’s agents, trying to save the boy who could one day deliver their people from captivity. 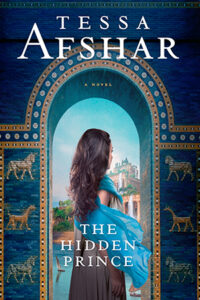 Buy The Hidden Prince from the FF Store HERE!