Henry O. Arnold has been an actor and writer for stage, screen, and fiction for the last several decades. He has written a multi-volumed, biblical/historical fiction series entitled The Song of Prophets and Kings. The first three books A Voice Within the Flame and Crown of the Warrior King and, The Singer of Israel, were published by WhiteFire Publishing. Two more books in this series are coming and will complete this exciting biblical saga. His documentary film entitled I Go to the Rock: The Gospel Roots of Whitney Houston, will be released in March 2023.

In this interview, Henry talks with us about the third book in his The Song of Prophets and Kings Series, titled The Singer of Israel.

FF: What inspired the story in your book?
The stories of the first major prophets and kings of Israel are three thousand years old. They have the sense of mythology and fantasy about them, but unlike myth and legend, these ancient biblical stories contain the power of divine revelation. They reveal not only the fully human qualities of men and women in their interactions with each other, but more important, it reveals the mysterious interaction of God with his creation.

This was powerful to me. It made my heart swell and ache at the same time. I became intrigued by the men and women in Scripture whose hearts were both drawn to or away from God, and what might be the reasons behind their choices. I felt this urgency to dive into the Scripture in a way that I had never before experienced.

FF: What can you tell us about the main characters in your book?
David and Mikal are the two main characters in this third novel, The Singer of Israel. I am drawn to them because of their love for one another and the great trials they must endure to preserve it. But they are “star-crossed lovers,” and the cruelties of life forces them to separate at great cost to both.

FF: Which character surprised you the most?
I would say there are two characters in my series that surprised me the most are not mentioned at all in Scripture. I created them both out of whole cloth. Shira is the wife of the prophet Samuel, and she is introduced in the first book A Voice Within the Flame. Shira is a beautiful singer who can read and write, (she becomes Samuel’s first scribe after they are married), and she can break horses and teaches Samuel how to drive a horse-drawn carriage.

Then there is Saba, a famous Philistine artisan. He too is introduced in the first book and is also spy. Through his artistic work he eventually becomes a part of the lives of Israel’s first two kings. Both characters play important roles in the first four books of this series.

FF: Why do you think storytelling is such a powerful way to share truth?
I approach everything I write with the admixture of anticipation and doubt. My desire is to create something of truth and beauty. I feel at once helpless to wrangle the story that is consuming my imagination and at the same time confident enough to stand still and gaze into the beauty of such enormous powers as that of character, plot, and theme and hope to find the language that both lures a reader and compels them to commit to follow the trail.

Storytelling is a force of nature, and a story is told best when the author does not draw attention to him or herself. Yes, there is style in one’s writing, but style is something one is born with, not something you acquire by wealth or education.

Eudora Welty said, “Great fiction shows us not how to conduct our behavior but how to feel.” I would hope that what I write will provide in much the same way. When we are able to empathize with fictional characters we begin to understand what it means to be human.

FF: What can readers expect from the rest of this series?
The series is entitled The Song of Prophets and Kings. Book one is A Voice Within the Flame and it introduces the reader to the early life of Samuel, prophet and judge of Israel and follows up to the point where he is asked by Yahweh to anoint Saul as the first king of Israel. Book two, Crown of the Warrior King, picks up right after the coronation of Saul and the early years of his reign as king. The Singer of Israel introduces us to David who has been secretly anointed the future king by Samuel and ends with David’s flight from Saul. Book four, The Fugitive King, deals with David on the run and Saul’s relentless pursuit of him. Book five (still untitled and yet to be written) will examine David who is at once called “a man after God’s own heart,” and still has what is called today a dysfunctional family. It should be relatable to any who might read it. Book five will end with the coronation of Solomon.

FF: What kind of research did you do for this book?
In 2015 I sat down with an Old Testament professor from a university in Nashville and told him what I hoped to do. He recommended some books that would provide context of the time period and loaned me books from his personal library. As I began to write, I expanded my research to include extra biblical resources of the time.

Once I started writing, the act of storytelling began to take on a life of its own, and I gave “the reins” over to the story. The story had the freedom to race with a pleasure that I could never bring by forcing it to my will. Giving “the reins” over to the story requires trust and vulnerability to the characters and the plotline. It is a mysterious process of sensitivity and sensing the art of storytelling through a fog and forest with no clear trail.

That said, I have and am staying true to what is revealed in the Scripture. I am not changing the context of story or character. What I am doing is adding details of what might have happened in the gaps of the biblical narrative as well as historical details gleaned from scholars, theologians, and historians.

FF: What do you want readers to take away after reading your book?
The stories in all three books in this series and the two more that will follow have stirred within my soul for decades. I have given these stories a personal artistic expression unique to my imagination and with an understanding of my own humanity. Just as these characters and their stories have struck my heart, I hope these novels might do the same in the heart of a reader, something a reader might have never before imagined.

FF: What are the biggest challenges for you as an author writing in your specific genre?
I love writing historical novels. I love bringing a vanished world to life on a page, inviting a reader into a world rich with human dimensions and dynamics. I am not an historian. The skill of the historian is to take the verifiable facts as they happened and give a reader a solid sense of place and time.

The novelist need not adhere to such a rule…completely. Certainly, they must assembly the pieces (historical facts) so the reader is secure in the knowledge that the novelist has created an accurate and believable setting in which the characters may exist. But the novelist is free to get inside the character’s heads and hearts and describe what is going on. I allow myself the freedom to invent, and thus, allow the reader the potential to feel a human connection to the characters. Hilary Mantel of Wolf Hall fame says, “If we want added value—to imagine not just how the past was, but what it felt like, from the inside—we pick up a novel.”

FF: What authors or books have inspired you as an author?
Currently it would be JRR Tolkein. Big imagination. Beautiful imagery. Over the top themes of good and evil. I just finished Lord of the Rings for the third time. Such great storytelling never gets old.

FF: How has your faith or world view impacted the way you tell stories?
I write because I must. These stories that stir within my soul must find expression that only I can give them. But as I look at the state of the world around me, I see such a need, yea verily, a prophetic need, to give these stories an opportunity to strike the heart of a reader in a way that they may never have experienced; just as these stories have struck my own heart. I want a reader to be given an opportunity to spark their imagination on what it might be like for them to have a personal experience with God, what it might be like to be in relationship with God, how this relationship is completed in the lordship of Jesus Christ. That the reader might be compelled to take up the journey of reading the Bible and begin the process of seeing the wonder of God’s presence in all creation.

There is a thirst for truth in the world today. The Bible shows the One who can quench that thirst. If this series can draw a reader to God for the first time or the reader who is presently in relationship to God and yearns for a deeper experience, then perhaps I have succeeded on some level to finish what I have started. 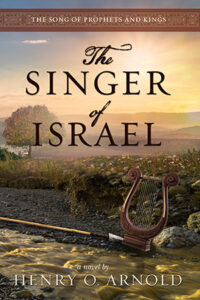