“The intersection of descending Bible reading and rocketing comics engagement is a cultural phenomenon evangelicals need to pay attention to.” – Art Ayris

LEESBURG, FL – The same day the comics world got socked with the news that DC Comics had just transformed Batman from a superhero embracing the Christian faith into an atheist, a central Florida publisher expanded its line explaining the faith into international broadcasting with motion comic animation. 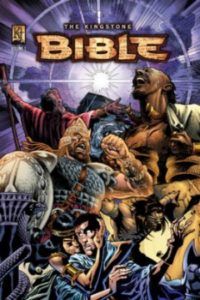 Kingstone Comics landed on the comics publishing map last year with the release of the Kingstone Bible, a finalist for Young People’s Literature in the Evangelical Christian Publishers Association 2017 Book of the Year awards. The Kingstone Bible’s superlatives already included not only the most complete graphic adaptation of Holy Writ ever done but is also the largest non-serialized graphic novel ever published.

Now the comics company has moved into motion comics and animation and discovered broadcasters and digital distributors eager to jump on board. Though other contracts are under discussion, two early agreements have been inked with international television broadcasters to carry Kingstone animated products into Europe and Central Asia, which will also reach such seemingly hostile areas as Iran, Tajikistan, Turkey, and Afghanistan.

“What many people don’t realize is that Iran is now experiencing a significant spiritual awakening and keen interest in the truth of the Bible. Meanwhile, here in America, the fictional icon Bruce Wayne turns from the faith his parents espoused in the newest issue of Batman,” states publisher Art Ayris. “The irony is certainly not lost on us.”

Apologetics is derived from the Greek word ἀπολογία apologia which carries with it the idea of a formal defense of a position. Kingstone Comics publishes a number of apologetic pieces that don’t shy away from handling difficult questions on Biblical reliability, canonicity, and the subject of hell. The series also answers common questions that people have such as “Where did Cain get his wife?” “How did the different races originate?” “What does the Bible say about UFO’s and aliens?” and even “What does the Bible say about pets in heaven?”

First releasing as a series of comic books, the popularity of the format became the fuel for the release of animated versions.

Kingstone is teaming with larger animation partners on a complete animation of the Kingstone Bible, but the company is currently releasing their own motion comics (digital versions of comics enhanced with sound and special effects) to help explain Christianity and the Bible.

Kingstone already has established a strong international presence with its products currently in 27 languages and new languages coming every month. Some of these include familiar languages like Arabic and Mandarin, as well as lesser-known languages such as Malayalam and Syrian Turkmen. “We were pretty jazzed when the Cambodian Bible Society distributed a Khmer version of our comics into public schools in Cambodia,” Ayris noted. “The Bible truly is a global document – whether in print, digital or animation.”

Not relegated to the Protestant faith only, Kingstone has also signed a licensing agreement for an upcoming Catholic edition of the Kingstone Bible.

“The bottom line for Kingstone is engaging the next generation in the Bible, wherever they are,” stated Ayris, the Executive Pastor at First Baptist Leesburg, where he oversees a sprawling and rapidly expanding three campus church. Ayris found a niche in writing and garnered several writing and film awards such as Best TV Movie in Hollywood’s Next Success contest and Best Feature in the Independents Film Festival.

He coupled his writing with other writers such as New York Times best-selling author Randy Alcorn, Ben Avery, a comics adapter for Game of Thrones creator George R.R. Martin, as well as famed apologist Dr. Ravi Zacharias. The evangelical writing group paired with over 40 artists with Marvel and DC Comics pedigrees to create a unique line of comic books that well – explain the faith.

Kingstone motion comics can also be found online through major portals such as ChristianCinema.com, Vimeo, Amazon Video, and of course KingstoneDigital.com. Print products of the Kingstone Comics can be found in stores, Amazon, and online at Kingstone.co.

A Bible passage Ayris puts a lot of stock in is Psalm 145:4 where the Bible states, “One generation will commend your works to another.” With an animated version of the Kingstone Bible underway and a new series of apologetic motion comics in production, both those who subscribe to faith, and those who don’t, may soon be seeing and experiencing an even more modern take on Psalm 145.

Watch some examples of Kingstone’s motion comics below:

101 Bible Questions-1 How did the different races originate?

101 Bible Questions-2 Where did Cain get his wife?

101 Bible Questions-3 How did Satan fall from Heaven?