Bloomington, MN (August 22, 2022)
Bethany House, a division of Baker Publishing Group, is pleased to announce that the Kiss of Death chapter of Romance Writers of America has selected The Barrister and the Letter of Marque by Todd M. Johnson as the winner of the 2022 Daphne du Maurier Award for Excellence in Mystery/Suspense in both the Published Mainstream Mystery/Suspense category and as an overall winner of the Published category. The award presentation took place on July 28 at the RWA National Conference in National Harbor, Maryland.

RWA, a nonprofit trade association whose mission is to advance the professional and common business interests of career-focused romance writers, is comprised of many chapters. The Kiss of Death chapter of RWA, founded in 1992 for mystery and thriller fans, underwrites and presents this award for excellence in mystery and suspense on an annual basis. The Daphne du Maurier Award for Excellence in Mystery/Suspense is named for Daphne du Maurier, the author of Rebecca, a suspense novel that is a precursor to today’s romantic-suspense novels. The writing contest is for published and unpublished authors of mystery, suspense, and thrillers.

Todd M. Johnson has practiced as an attorney for over thirty years, specializing as a trial lawyer. A graduate of Princeton University and the University of Minnesota Law School, he also taught for two years as an adjunct professor of international law and served as a U.S. diplomat in Hong Kong. He is the author of The Deposit Slip.

Book Summary:
As a barrister in 1818 London, William Snopes has witnessed firsthand the danger of only the wealthy having their voices heard, and he’s a strong advocate who defends the poorer classes against the powerful. That changes the day a struggling heiress, Lady Madeleine Jameson, arrives at his door.

In a last-ditch effort to save her faltering estate, Lady Jameson invested in a merchant brig, the Padget. The ship was granted a rare privilege by the king’s regent: a Letter of Marque authorizing the captain to seize the cargo of French traders operating illegally in the Indian Sea. Yet when the Padget returns to London, her crew is met by soldiers ready to take possession of their goods and arrest the captain for piracy. And the Letter–the sole proof his actions were legal–has mysteriously vanished.

Moved by the lady’s distress, intrigued by the Letter, and goaded by an opposing solicitor, Snopes takes the case. But as he delves deeper into the mystery, he learns that the forces arrayed against Lady Jameson, and now himself, are even more perilous than he’d imagined. 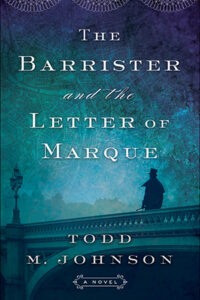 Buy Barrister and the Letter of Marque from the FF Store HERE!

Buy Barrister and the Letter of Marque from Amazon HERE!