After more than 55 years, everyone’s favorite Bear family continue to be as popular as they were when husband-and-wife author/illustrator duo Stan and Jan Berenstain launched the children’s series in 1962. The companion series Living Lights—featuring the Berenstain Bears in faith-based children’s books—has also proven a best-seller, with more than five million copies sold. Today, their son Mike continues to delight children with new Berenstain Bears projects. In this exclusive interview, Mike tells FamilyFiction about the origins of the series, how he makes new Berenstain Bears titles, his personal favorite out of all the books his parents made—and how you’re really supposed to pronounce the family name…

Can you tell us a little about your parents’ backgrounds? Maybe how they became acquainted and the illustration work they did prior to the bear series? 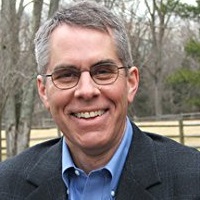 The Berenstain family were Jewish immigrants from the Ukraine in the 1880s. Stan’s grandfather, Berenstain, was a blacksmith. His son, Harry—Stan’s father— worked as a clerk in an army navy store. He later opened his own store, eventually owning several in the Philadelphia area.

My mother’s maiden name was Grant. Her family was a Scottish, Irish, German mix. According to family records most of them arrived in America in the early 19th Century. The last arrival was her grandfather Grant—a carpenter who trained his son, my grandfather, in the craft. My mother was brought up Episcopalian.

Stan and Jan were both born in 1923. They both lived in West Philadelphia but went to different schools or they might have met much earlier. They grew up during the Great Depression and their families experienced much financial hardship.

But both felt they had very happy childhoods. They enjoyed school, they liked to read, they like sports, but, most of all, they loved to draw. Drawing and art became an increasingly important part of their lives as they moved on to junior and senior high school. Stan’s family remained in West Philly but Jan’s family moved to the suburbs.

Their mutual art talent had led both of them to scholarships to the Philadelphia Museum School of Industrial Art (now, the University of the Arts) which finally brought them together in the autumn of 1941. There was time for romance to briefly flourish before Pearl Harbor.

My father was drafted into the Army in World War II in spite of being blind in one eye. He had amblyopia as a child which was never treated. It turns out lots of men who were blind in one eye were drafted and given specialized basic training. The idea was to have these men take on non-combat military duties to free up more of the fully two-eyed to be sent overseas.

He wound up at a military hospital in Indiana where he spent most of the war as a medical illustrator recording facial reconstruction operations on wounded soldiers.

While Stan was in the Army, Jan served on the civilian front as a riveter in an aircraft factory. After two weeks of training, she joined the workforce at former trolley car factory which was assembling center wing sections for Navy PBY seaplanes.

As a medical illustrator, Stan took advantage of his few spare hours to try his hand at the creation of cartoons. He tried sending a batch of these on literary and artistic themes to a magazine he found in the Base Library, The Saturday Review of Literature.

He was surprised and delighted to receive in reply a $140 check for four cartoons. Encouraged by this largess, he began cranking out a series of cartoons about sculptors, painters and poets.

Stan was discharged from the Army on April 1, 1946. He and Jan were married ten days later by a magistrate in a storefront courtroom on South Broad Street, Philadelphia. After being separated for more than three long years, Stan and Jan were eager to start a career in which they could work together as a team.

Freelance cartooning seemed a good possibility. So they took up residence in a ramshackle apartment atop Stan’s father’s Army and Navy store in a tough neighborhood of Southwest Philly. First they simply signed their work, “Berenstain,” and sent out cartoons to all the leading magazines.

But they soon discovered that the only leading magazine that bought any of their offerings was The Saturday Review of Literature. They were able to sell a few spot illustrations to the book review of the local newspaper and, significantly for their later career, some of these featured images of children reading. But these and other odd jobs could scarcely pay the bills of even their starving-artists lifestyle.

Eventually, they began experimenting with cartoons about everyday life—about families and kids. As a newlywed couple, they had limited firsthand experience as spouses and none as parents. But they certainly had a great deal of experience growing up in families—what’s more, in large extended families surrounded by the teaming, child-packed neighborhoods of Depression-era Philadelphia. 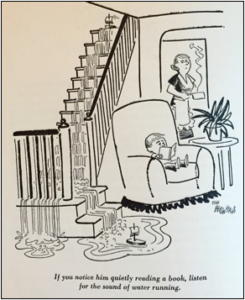 They knew a lot about kids. Why not, they reasoned, use their own childhood experiences as the basis for cartoons? Their earliest efforts dealt with tried-and-true childhood themes like making mud pies. But their distinctive style began to emerge. They started to come up with cartoons that conveyed a uniquely childlike perspective on family life.

These cartoons struck a nerve. First The Saturday Evening Post, then Collier’s and then a host of other magazines began buying them. When a savvy editor pointed out the fact that they were a husband-and-wife team was a good publicity angle, they changed their byline to “The Berenstains” and a historic sixty-year-long partnership devoted to chronicling family life began.

The Baby Boom is defined as the steep increase in the birth rate which occurred between 1946 to 1964. Stan and Jan were in the thick of it, not only as cartoon chroniclers of the generation, but as active participants. They contributed their own first shot to the Boom in early 1948 with the birth of son, Leo. 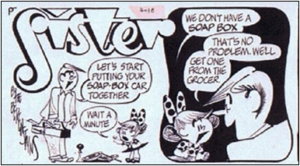 At this time, they began to focus their efforts on a tomboyish, wise-cracking little girl they called, simply, Sister—a cartoon everyone could connect with.

People sometimes ask where the idea of naming the Berenstain Bears by their family roles, “Papa,” “Mama,” “Brother,” and “Sister” came from. They seem to assume it has some subversive ideological import relating to their origin in the turbulent 1960s. But the fact is it came out of the world of 1940s American family magazines where kids were generically dubbed “Butch” or “Skip” or “Sis”—just another average all-American kid.

In 1950, having achieved some financial success, they decamped their tar-papered shack of a city apartment for a modern house in a green and leafy Philadelphia suburb. There they let off the second and final volley of their own personal Baby Boom with my arrival in late 1951.

How did this lead to them creating books? 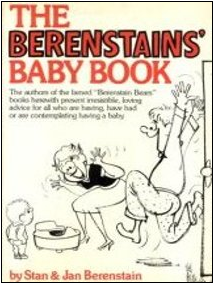 Stan and Jan’s rising professional profile drew the attention of an editor at Macmillan. Since they were so good at creating cartoons about kids, he wondered; why not try their hands at a book on the subject, as well? Dr. Spock’s Baby and Child Care book was, of course, the bible of child-rearing in the early Fifties and seemed a natural target for a disrespectful spoof. Thus was Berenstains’ Baby Book born, soon to be followed by a sequel, Baby Makes Four, and several other child-rearing-themed books.

In their magazine cartoons, Stan and Jan focused on a series called It’s All in the Family (no connection to the later TV sitcom) which appeared in McCall’s and Good Housekeeping. I had the good fortune to work on the feature in its last few years under my parents’ close (and strict) supervision. We finally decided to retire the feature in 1988.

Of course, by then, the hugely popular Berenstain Bears children’s book series, which made its debut in 1962, had come to dominate the creative life of my parents and, later, myself.

Tell us how The Berenstain Bears series began… 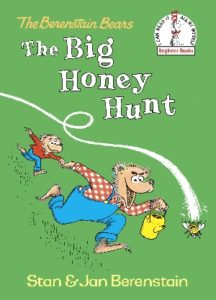 The transition from cartoons about children to books for children was a natural one for Stan and Jan. As parents, themselves, they were interested and critical consumers of children’s books. Their professional interest was aroused, as well, when many former cartoonists came into prominence in the children’s book field during the early Sixties.

Most prominent of all was Theodore Seuss Geisel, also editor and publisher of the new Random House Beginner Books line, an outgrowth of Geisel’s groundbreaking early reader, The Cat in the Hat.

Stan and Jan decided to try their hands at the creation of a children’s book and found the result good. When they submitted it to Dr. Seuss, he agreed with them.

“Ted” became their first children’s book editor as well as their chief exhorter, mentor, fan and, at times, task-master in their newly-chosen careers as children’s authors and illustrators. They created about twenty books with Geisel, and then went on to produce about two hundred more over the next forty-odd years.

The character of their relationship with Ted was established at their first meeting with the great man. “I like your bears,” Ted began. “I think they’re fun. I like the idea of family. And…” he added, encouragingly, “I love your drawings. But I need to know more about them. Who are these bears? What does Papa do for a living? What kind of pipe tobacco does he smoke?”

To my parents’ considerable discomfiture, Ted proceeded to subject their simple children’s story to an analysis worthy of his literary studies at Oxford in the 1920s. In other words, he ripped it apart.

They finished up their session with handshakes and Ted’s query, “How long do you think it’ll take for the next draft?” After a long, long series of drafts, sketches and layouts, the first Berenstain Bears book, The Big Honey Hunt, was published in the spring of 1962.

Click through to learn how Dr. Seuss inadvertently named the bears…