Book Summary:
Somebody stole The Impossible Son. Jak had the card in his hands—a picture of a boy with tied wrists and a knife at his throat—but now it’s gone and, without it, Gramma Josie will never come back to life and neither will anybody else.

He has four Thread cards left and when he meets a tribal chief named Abram, Jak is pretty sure he’s found the man on the “Father of Many” card. Yahweh has even promised to give Abram as many descendants as the stars in the sky, but Abram’s an old man and his wife can’t have kids. Sounds like it would have been a perfect match between the father who can’t have kids and the son who could never be born, but it’s just too…impossible.

A traveling merchant tells Jak the Egyptian priests can bring the dead back to life—exactly what he’s looking for—but mysterious dreams begin invading Jak’s sleep, leaving him exhausted, with no idea what the dreams mean. To make matters worse, Jak finds out Yahweh has demanded a terrible sacrifice from Abram, and he’s not even sure he can trust Yahweh anymore.

Where is the Impossible Son? What do the dreams mean? And is Yahweh good or evil?

Between the traitor and the thief, the baker and the slave, everyone has their part to play in this second book of the Jak and the Scarlet Thread Series. 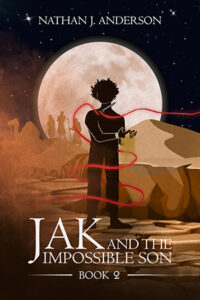 Buy Jak and the Impossible Son from Amazon HERE!