Book Summary:
In the third and final installment in the Sunlit Lands series, the magic of the Sunlit Lands has been reset, but that doesn’t mean all is well. Unrest and discord are growing by the day, and Hanali is positioning himself as ruler of the Sunlit Lands. But, in order for Hanali to seize control, there must be a sacrifice, one that very few are willing to make. Jason, Shula, Baileya, and others must work together to save the lives of those Hanali would sacrifice for his own gain. 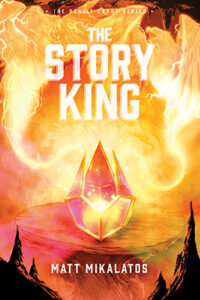 Buy The Story King from the FF Store HERE!

The Crescent Stone Book Summary:
A girl with a deadly lung disease . . .
A boy with a tragic past . . .
A land where the sun never sets but darkness still creeps in . . .

Madeline Oliver has never wanted for anything, but now she would give anything just to breathe. Jason Wu skates through life on jokes, but when a tragedy leaves him guilt-stricken, he promises to tell only the truth, no matter the price. When a mysterious stranger named Hanali appears to Madeline and offers to heal her in exchange for one year of service to his people, Madeline and Jason are swept into a strange land where they don’t know the rules and where their decisions carry consequences that reach farther than they could ever guess.

The Heartwood Crown Book Summary:
After destroying the Crescent Stone, Madeline returns home, bringing Shula and Yenil with her. As her health continues to deteriorate, Madeline feels the Sunlit Lands calling her back. Meanwhile, Jason, Darius, and the rest of the inhabitants of the Sunlit Lands fight for survival and freedom. The magic that fuels the land is failing, threatening to destroy them all. Will Madeline’s return save the land and its people? Matt’s signature humor and epic storytelling are once again on full display in The Heartwood Crown.