But when an assault by John David Billings, the son of a wealthy rancher, leaves her pregnant, Madeline sacrifices both options, choosing to leave town and raise the child alone.

It’s been several years, and when she returns to her hometown to meet with her father, rumors circulate about John David’s trial–for assaulting other women. Madeline struggles with the secret she’s kept from her daughter–and everyone but her father–all of these years.

If she testifies, John David could be put away for good. It doesn’t help that he’s hired a killer lawyer, and it would take a testimony like hers just to put him behind bars. But if she unveils her past, that could have some dangerous repercussions for her daughter.

She has trusted God throughout her entire life, but can she trust him to carry her through this trial? 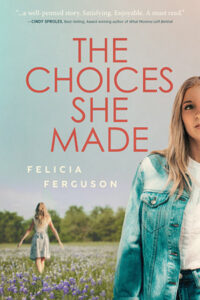 Buy The Choices She Made from the FF Store HERE!

Buy The Choices She Made from Amazon HERE!