Book Summary:
The Last Chance Detectives are searching for a long-lost treasure, but they’re not the only ones.

In book seven of the Last Chance Detectives series, readers learn that people aren’t always what they seem—and that some treasures are worth more than gold.

Mike and his friends come across an ancient artifact that could unlock riches beyond their wildest dreams. Those dreams are threatened, however, by an unexpected break-in that has the local sheriff puzzled. When a mysterious stranger shows up in town, Mike, Winnie, Ben, and Spence wonder if they are in more danger than they realized.

Their hunt for the treasure becomes a race against time as the Last Chance Detectives come face-to-face with perhaps their greatest foe ever! Quest for the King’s Crown is a story of heart-pounding action, age-old mysteries, and several unexpected twists. Does the gang have what it takes to meet this challenge?

The Last Chance Detectives won’t stop until the mystery is solved! 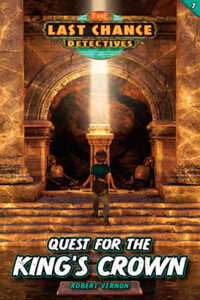 Buy Quest for the King’s Crown from the FF Store HERE!

Buy Quest for the King’s Crown from Amazon HERE!

Canyon Quest Book Summary:
A dry, forsaken blip on the edge of civilization. That’s what Mike Fowler thinks of the little town of Ambrosia in the Arizona desert. He has no friends, no fun, and no answers to the agonizing disappearance of his dad in a top-secret military mission. But that could all change after Mike stumbles onto his dad’s puzzling journal in the old B-17 out back.

The mysterious coded entries in the journal lead him to a hidden canyon rimmed with strange lights in the sky, muffled voices, and a knife he’s sure belongs to his dad! Something big―maybe a covert military operation―is going on in that secluded canyon. And Mike is sure if he just follows the clues, he’ll find his dad. But with each new discovery, he and his daring companions―Ben, Spence, and Winnie―land in more and more danger.

It’s the case of their young lives. Now if only they only live to escape it! 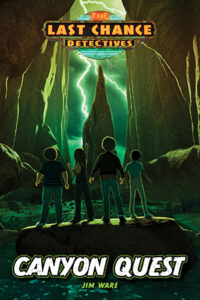 Mystery Lights of Navajo Mesa Book Summary:
Four friends make a shocking discovery that could cost them everything!

At the edge of a small desert town, where a B-17 sits next to an old diner, a mystery has begun to unfold. At first it was just a strange voice on an old radio. Then there’s a robbery at the Ambrosia cultural museum―priceless Aztec relics are stolen. And Ben has an encounter in the desert that can only be described as out-of-this-world. When mystery lights begin to appear in Navajo Mesa, the local sheriff grows strangely silent about it all.

But four everyday kids who call themselves the Last Chance Detectives have decided to investigate. Little do they know they are being drawn into a serious plot with international consequences. 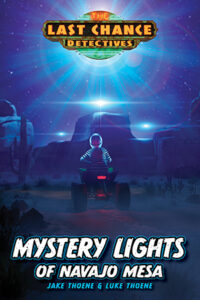 Legend of the Desert Bigfoot Book Summary:
Is a mythical beast lurking in Ambrosia?

It travels only at night. It stands three feet taller than the average human. It wields incredible strength. It’s been called Sasquatch, Yeti, Orange Eyes, Mud Monster . . . Bigfoot . . . and the people of Ambrosia believe it’s only a legend. Until now!

Long, coarse strands of animal hair the vet can’t identify . . . old Silas’s wild story . . . metal doors ripped apart by powerful claws . . . terrorized campers . . . and in the middle of it all, a dog named Jake, who captures a place in Mike’s heart.

Legend of the Desert Bigfoot plunges Mike, Ben, Winnie, and Spence into a mystery they never could have imagined. 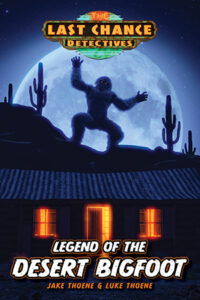 Buy Legend of the Desert Bigfoot from the FF Store HERE!

Escape from Fire Lake Book Summary:
Will Mike find his way out before he runs out of water?

Winnie, Ben, and Spence have just found Mike’s compass in the dirt at an old abandoned motel in town. And worse, the empty getaway car from yesterday’s bank robbery is sitting in the motel’s courtyard.

The Last Chance Detectives launch a desperate search for one of their own―but it’s a race against time, and the odds are against them.

A manhunt . . . the figure of a winged jaguar . . . flames in the desert sky . . . and a trail of clues lead out into the barren, unforgiving wilderness known as Fire Lake. 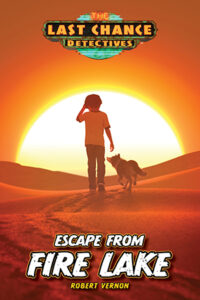 Buy Escape from Fire Lake from the FF Store HERE!

Memories of Mike’s dad resurface when a space shuttle mission goes bad and the family of the pilot witness the shocking disaster in the desert skies above Ambrosia. Will Mike ever discover the truth about his dad’s plane crash in the Middle East? Why won’t God answer his prayers?

Soon another mystery unfolds as reports of strange and frightening apparitions filter in from the desert, along with smoky green fog. Could aliens and enemy soldiers both be attacking Ambrosia?

Mike, Winnie, Ben, and Spence investigate at an abandoned military base―only to discover that their greatest fears await them. 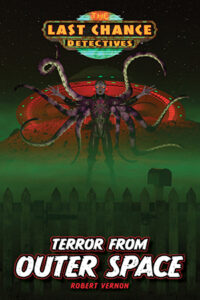 Buy Terror from Outer Space from the FF Store HERE!

Revenge of the Phantom Hot Rod Book Summary:
A mysterious old car is terrorizing the roads outside Ambrosia, and the Last Chance Detectives are determined to find out who’s behind it―and why.

A dangerous highway encounter. A phantom roadster. A thirty-year quest for revenge.

Arlene, the sheriff’s assistant, is driving home from work one evening when a classic hotrod pulls up alongside her. What did Arlene see that night that has her so frightened? Who was inside the other car, and what about that threatening message the driver left behind?

Mike, Winnie, Ben, and Spence―four kids known as the Last Chance Detectives―decide to investigate this case of terror on the highway. They learn that Sheriff Smitty has a secret from his past, a secret that puts him and the young sleuths in danger.

Revenge of the Phantom Hotrod calls on the four friends to work through their differences and follow what God teaches about justice and forgiveness, before it’s too late!