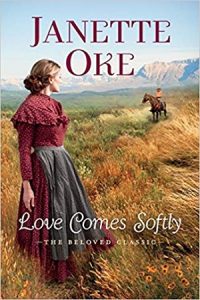 Adapted for television in 2003 by the Hallmark Channel, Love Comes Softly became one of their most watched films ever. Millions have laughed, wept, and rejoiced with Marty and Clark Davis, whose tragic circumstances threw them together, suddenly and unexpectedly, on the frontier prairies of the late 1800s.

In the years since the book’s first publication, Janette’s novels have sold more than thirty million copies. She has also received the ECPA President’s Award, the CBA Life Impact Award, the Gold Medallion, and the Christy Award. 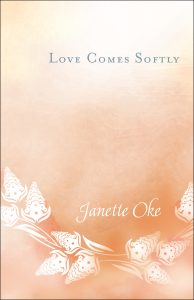 Heading west with her adventurous husband to claim land, tragedy intervenes and Marty is left alone with her great loss and no way to return home. After his wife’s death, Clark and his little girl are also in great need. His proposal to Marty comes with good intention, but will courage and faith be enough to bring them true love?

My hope is that my books, which I do not regard as “romance novels” but as slices of life, will show readers that a personal faith in God and the fellowship of family and selected friends will bring harmony and inner peace to their lives. If my books touch lives, answer individual’s questions, or lifts readers to a higher plane, then I will feel that they have accomplished what God has asked me to do. (Read the interview here)

BUY THE BOOK FROM OUR STORE!